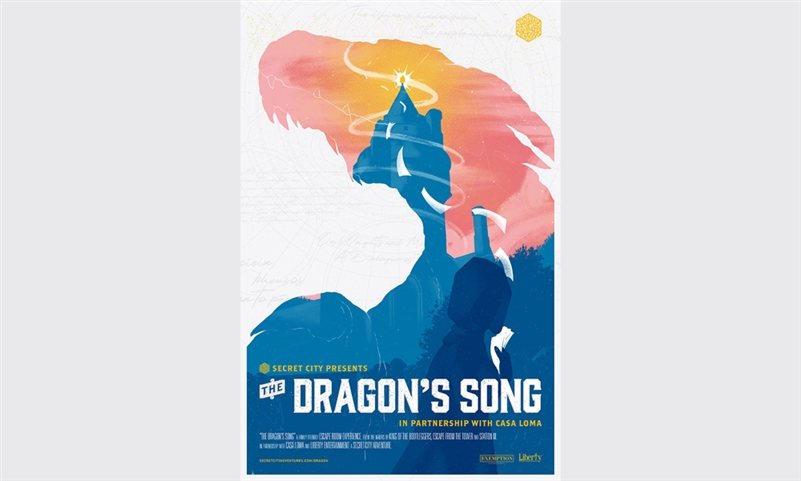 Secret City Adventures, in collaboration with Liberty Entertainment Group, will transform Casa Loma for the fifth permanent immersive experience as part of the popular Casa Loma Escape Series. Launching on November 1st 2019, The Dragon’s Song invites you into a fantastic world, full of strange science and mystical wonders. The fate of the kingdom is in your hands.

Delivering the most unique adventures that push the boundaries of storytelling; Secret City Adventures will unlock your potential in an adventurous entertainment like nothing you've experienced before. The concept includes a cast of stage actors and our most elaborate set to date, creating a completely immersive experience for players. The game was written, as a collaboration of game design, emerging technology, and theatre expertise. "With the setting of the historic castle and the creative fuel behind the series, The Dragon’s Song is a one of a kind edition of the world-wide gaming trend that you do not want to miss.” said Nick Di Donato, President and CEO, Liberty Entertainment Group. “We’re thrilled to bring our biggest and most elaborate family friendly escape game series to Casa Loma with only the most experienced design specialists.”

The Dragon’s Song runs seven days a week at Casa Loma (1 Austin Terrace) with games at 5:00 PM, 7:00 PM, 9:00 PM and 11:00 PM with additional times of 1:00 PM and 3:00 PM on Saturdays and Sundays at a cost of $40 - $46 per player. Each game accommodates a group of 12 players for a 90 minute experience. The Casa Loma Escape Series invites you into a fantastic world, full of strange science and mystical wonders. It's an all-ages adventure, perfect for the whole family. Be the hero. Discover the magic. Save the dragons.

The fate of the kingdom awaits you!