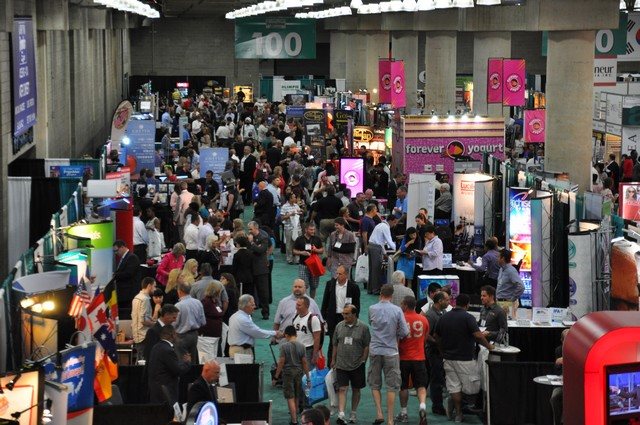 This year, the International Franchise Show opened with a wider and greater array of innovative businesses which were developed with a combination of out-of-the-box thinking and technological prowess. With over 200 businesses being previewed in 26 different cities, the winner of this year's Best Franchise awards were quite obvious judging by all the hoopla coming from the winner's exhibit location.

?The International Franchise Show presented its awards to various "show stoppers." The award for Best in Show went to the company who without a doubt had the most buzz (and other sounds) coming from its exhibit.

At any given time there were probably about 1,500 - 2,000 people on the exhibition floor at all times, but it seemed like the large majority were camped in front of this year's winners. The Mission Impassable Portable Laser Maze and the Trapped Escape Experience were two of the big winners.

The Award for Best Innovation went to the Mission Impassable Portable Laser Maze for being the first to create a portable party/event entertainment system which could be set-up in less than an hour. "In previous years, the popular laser maze attractions required a very substantial capital investment to own one," said Chris Pags, director of marketing for Robins Laser Attractions. "Plus, it required the purchase, storage and transportation of a large trailer, not to mention finding a place to park it for the party. Now, all the owner has to do is transport the equipment in a normal sized car and set it up in any house, room, garage, office, classroom, etc."

The awards for Best in Show as well as Best New Business went to Trapped Escape Rooms for their Modular Escape Experiences. Escape rooms are quickly becoming one of the most popular form of entertainment for groups of all ages and sizes. Usually, the average escape game gives participants 60 minutes to escape, but due to the large crowd and the fact that everyone wanted to try it, attendees only received a 20-minute experience inside a make-shift escape room set-up in an enclosed tent. "The waiting list for the escape was longer than there were minutes in the day, so I pre-reserved a spot for the 2nd day of the show," said Otus Etinger, a show attendee. Escape rooms can be relatively expensive to start-up, but the ones displayed at the show would cost the average person under $2,000 and could be easily set-up in just a few hours. The entire experience was fantastic and used fantastic and magical props that made me feel like I was in an episode of the DaVinci Code. The company had already taken over a dozen orders in just the first half-day of the show.

With nearly 10,000 attendees during the two day show, this year's show hosted more than 100 first time exhibitors spurred by the desire to expand throughout Canada and the U.S. Many veteran IFE franchisors claimed they saw more foot traffic by noon on the first day than they did over the course of the entire weekend during last year's event.

Of course, there were the usual suspects, Little Caesars, Dairy Queen, Roto-Rooter, UPS store, Minuteman Press, Game Stop and many other of the 'A' listers along with some new copycats such as Freshslice Pizza, CoolTreats, Valu-Rooter and the Game Dudes. Probably about 85% of the show was redundant as the Franchise industry seemed to have run out of new ideas and always repeats what is hot.

Media interest in the show was at an all-time high too, as word about the show's significance spread in the weeks and days leading up to the show amid concerns that the NAFTA between the U.S. and Canada was about to change the ways Canadians conduct trade in the coming year.

Expo Management, the show's producers, ramped up their marketing efforts with street teams, billboards, street banners and media buys with publications like Money, TIME and Fortune to increase awareness of the new and improved show.

The show will come to New York in 2020 where the list of franchises and business opportunities nearly doubles.